A Field Guide to the Bacteria?

I regularly check prolific blogger Jonathan Eisen’s website the Tree of Life, and lately have been thinking about his dream of producing a ‘field guide for microbes‘ (I limit myself to the bacteria). Like Jonathan, I make frequent use of field guides, for instance when going rock pooling here in Cornwall (see 1 & 2). I am especially fascinated by fish, and am a very bad birder too.  The whole reason that I became an evolutionary biologist was not so much due to any early interest in genetic drift, maximum parsimony or competitive exclusion, but rather because I was an avid shell collector as a kid, and field guides allowed me to determine the species identities of my beach finds. 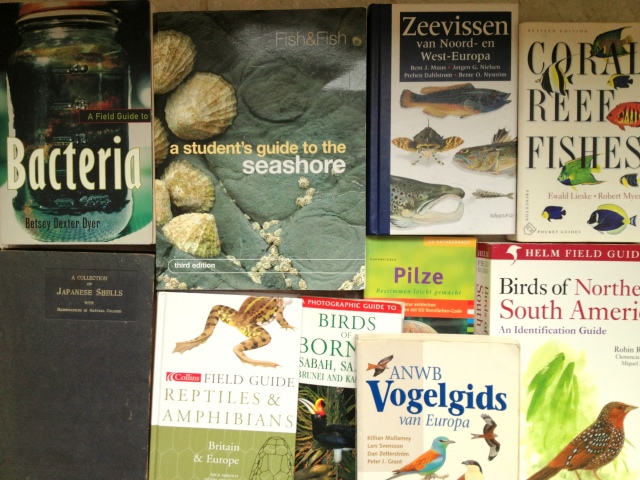 Field guides are not solely the domain of the wandering amateur natural historian but can be quite specialist and highly useful for professional experts. Microbes however? Actually, a field guide to the bacteria, by Betsey Dexter Dyer, has been around for almost ten years. This book focuses basic microscopy but also on the macroscopic marks left by microscopic cells, such as galls, scums, crusts, blooms, (dis)colorations and fermentations. Highly recommended for anyone with an interest in microbes. However, Jonathan talks of a guide with detailed information on how to ID individual species, including information on phylogeny, genomics, phenotypes, ecology, metabolism, niches, biogeography and behaviour, which would make it a completely different book. An ongoing project that describes and classifies bacterial species is Bergey’s Manual of Systematic Bacteriology which includes these types of information.  This is not what Jonathan wants his guide to be either: it should be more accessible to the general public (Bergey’s tomes are hundreds of $/£/€ each and definitely not designed to be carried around in the field) and even have the public participate in updating it (more on that below).

There are some enormous challenges to producing a field guide to bacteria. Maybe 15.000 or so species have been described but there probably are many millions of species left that are undescribed (even my collaborator Chris Quince who is a world expert on estimating microbial species diversity has no real idea what the order of magnitude in species number is, maybe there are billions of species?!). As Jonathan notes, this challenge could be made somewhat less daunting by initially focusing on a particular taxonomic group or habitat.

Another problem is taxonomy: where does similarity between different strains end and dissimilarity between species begin? Field guides describe species so this is pretty crucial. However, speciation and species concepts in the context of bacteria is still largely unresolved. Whatever the species definition that is used, in order to keep any guide manageable it might best be broad (taxonomists are themselves classified as ‘splitters’ and  ‘lumpers’). Bacterial speciation is a big interest of mine and you can read some of my thoughts on the topic here.

Now the real problem: how to produce a field guide for things that cannot be readily observed in the field? (It goes almost without saying that this guide will be an app on a smart phone/tablet). Information on macroscopic features as provided in Dexter Dyers book certainly will be a must, but this will only allow identification of some conspicuous groups. To ID cells one would need to couple the guide either to field-microscopy or to field-sequencing. I have a little digital microscope (I should use it more often) that can be connected to a laptop; I am sure devices will come on the market that are smaller and allow higher magnification. This is probably not the way to go though. However fascinating bacteria are, cell morphology is not their main attraction and the potential to differentiate between species is low. From Wikipedia:

Definitely some variation there, but not enough to tell a million species apart. So cheap, portable, high-throughput sequencing it is then! It will take some years to become available but it does not hurt to do some advance day dreaming. Imagine walking through some dunes and pouring a sample of sand in your handheld device coupled to your tablet (which by this time has a lot more computing power and battery life). An hour later (yes I am an optimist), detailed graphics start to pour out over your screen (probably projected in 3D come to think of it), telling you exactly what bugs are present and what functions they are (capable of) performing. (Note that as I am relatively rich and healthy I imagine using this device whilst walking through nature but it could actually be of much greater use checking drinking water etc.) 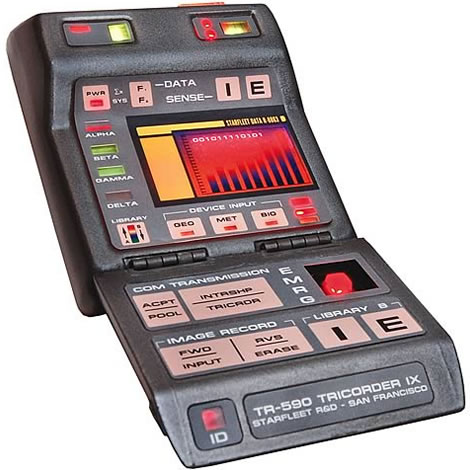 Star Trek’s Tricorder: The Next Generation?

Our device will consist first of some sort of sample filter to separate cells from debris. I can think of two routes to be taken next: sequence all DNA in the sample as one big mix (metagenomics) or separate cells using microfluidics and sequence individual genomes. Perhaps this could be done by pulling individual chromosomes through graphene pores, measuring how electric current running through this carbon is differentially affected by A’s, T’s, G’s and C’s passing it in turn (see here and here (latter link with comments by Jon Eisen)). Major improvements in computing power and software will be needed to be able to analyze the tremendous amount of data generated. All sequence data will be uploaded to the cloud, including metadata (location, date, host etc), available to all. In this approach, phenotypes will have to be inferred from gene sequences (a method termed ‘reverse ecology’). A major bottleneck will be that the function of very many sequences will have to be inferred from relatively few sequences that have received attention from proper functional studies (a separate public participation science project would need to be started to speed that up).

The last two paragraphs are pure science fiction. However, sequencing methods are beating Moore’s Law. Projects are already underway inviting the public to send in samples for sequencing. Heck, smartphones have only been around for five years or so, tablets for two years. It is hard to predict what we can do in ten years, but we might be in for some surprises!

P.S. Two nice interviews with Jonathan Eisen about his topic can be found on your wild life and wired.

5 Responses to A Field Guide to the Bacteria?