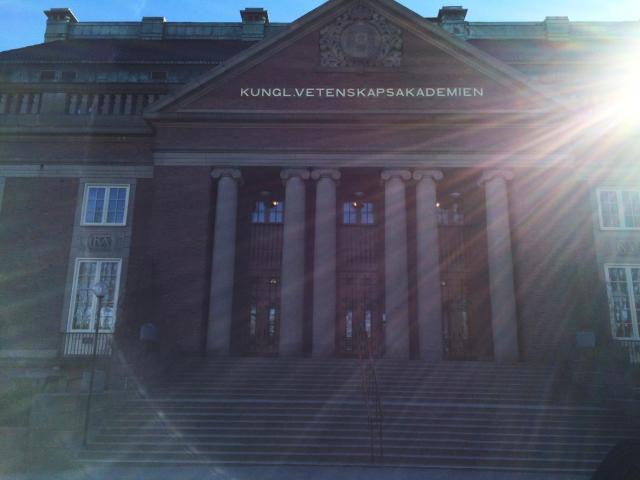 The Royal Swedish Academy of Sciences. Thanks to Uli for the artistic sun shot.

I think it’s pretty common for every scientist to dream at least once about winning a Nobel Prize for their research. While sadly the vast majority of us will always remain underappreciated by the Royal Swedish Academy of Sciences, you could argue the next best thing would be to be asked to present your research at the Academy. In which case, the Coastal Pathogens group is doing pretty well.

Will, Uli and I attended the Marcus Wallenberg Symposium entitled ‘The role of metals and biocides in the selection of antibiotic resistant bacteria’ at the prestigious Kungliga Vetenskaps-Akademien in Stockholm from the 15th to 16th of March. As an invited speaker, Will presented his impressive back catalogue of work on quaternary ammonium compounds and co-selection for antibiotic resistance (which he has been working on with Lihong for several years, and more recently – myself), alongside big names like Dan Andersson (who’s 2011 paper on minimal selective concentrations was the inspiration for my PhD) and Joakim Larsson (well known for his work in pharmaceutical factory effluents). Uli also presented some of his work from his PhD under Bart Smets on bacterial community permissiveness (the ability to take up a plasmid) under metal stress.There was a good balance of clinical (Maillard, Ingmer, Perron, Melhus) and environmental (Will, Graham, Brandt, Larsson) based research investigating co-selection of antibiotic resistance. The symposium was open to attendance to the public, so the varied audience (academia, industry, healthcare etc) had some interesting comments and questions in the concluding round table discussion, particularly what the next steps might be in tackling this issue might be. The consensus seemed to be that without more concrete evidence to show metals and biocides do co-select for antibiotic resistance, stakeholders would remain unwilling to undertake the massive mitigation steps that would be required and the financial burden that would follow. 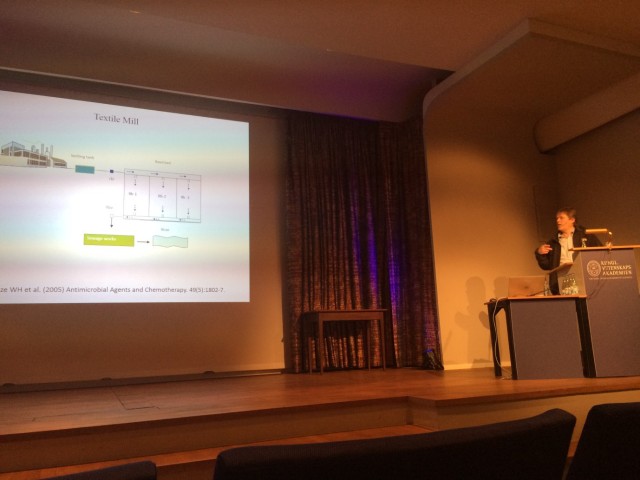 Will presenting his talk: “An environmental perspective of the role of quaternary ammonium compounds in co-selection for antibiotic resistance.” Thanks to Uli for the pic.

Stockholm itself (the little I managed to see of the Old Town, or ‘Gamla Stan’) was simultaneously quaint and charming but also impressive, riddled with narrow cobbled streets but peppered with enormous majestic buildings like the cathedral and the Nobel Prize Museum. From the latter I did live the dream and get my very own Nobel Prize medal. Unfortunately it was only a chocolate one… but it was delicious.