Our module ‘Living with Environmental Change’ ended a few weeks back and it is high time for a (brief) wrap up after the previous posts highlighting the guest lectures on the course (here, here and here). As the module was spread across two campuses that are a 100 miles apart, I did not cover all sessions in Exeter and so will not highlight lectures by Steve Simpson, Bouke Wiersma, Katrina Wyatt, Mel Austen, or Peter Cox, who I missed in Penryn due to illness. However, in Penryn I did host ECEHH colleague Tim Taylor who spoke about the wonderfully named eDPSEEA framework that can provide a handle on how to mitigate negative impacts on ecosystems services (you will have to read the paper for an explanation!): 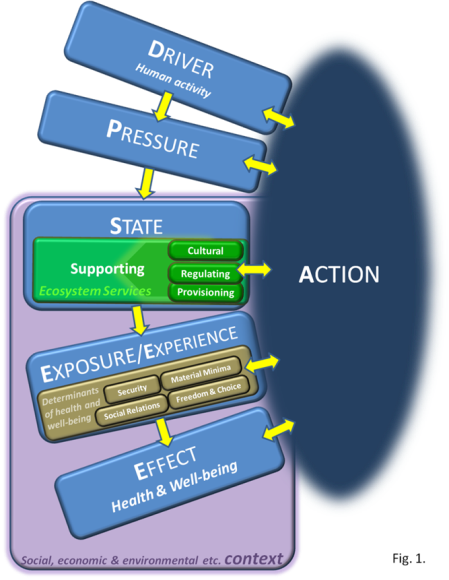 We also had ECEHH colleague Ruth Garside talk about the importance of public engagement in environmental and medical sciences. She brought along three members of the local HEPE group: members of the general public who provide scientists with input on the societal impacts of research projects. One example of a project HEPE members have participated in is the Beach Bum project (see also this related post). We had the pleasure to have Rachel Turner, based at the ESI, over to talk about linking environmental change, health and wellbeing in fishing communities. This featured not only the direct dangers of fishing on the open seas but also more indirect effects in the community. Not much information is available on this topic and most of it is hidden in very disparate literature and so it was especially great to hear about her own work in a local Cornish fishing community. 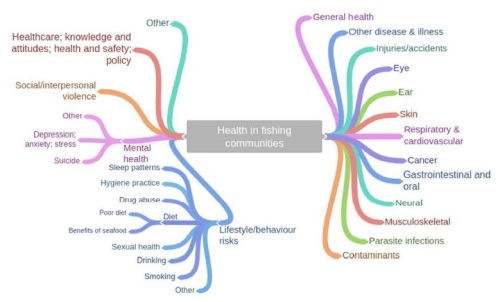 Environmental and social consultant Edvard Glucksman at mining company Wardell Armstrong spoke about mining (an enterprise arguably even more Cornish than fishing), specifically how to mitigate its effects on the envionment and on local communities. Amongst other issues, Ed highlighted the case of the Arctic, where extraction of natural resources (oil but also rare earth minerals) climate change, social injustice and geopolitics all come together. The mining focus of his session was a great preparation for the module field trip to Wheal Jane, the site of an old, large tin mine located inbetween Penryn and Truro. In 1992, shortly after mining operations were abandoned due to low tin prices, a large amount of highly acidic minewater laden with heavy metals was discharged in the Fal Estuary. There is now a continuous operation in place to treat the water coming from the mine and we were lucky to see how this all happens and contemplate what effects mining disasters have on human health. Our tourguide Chris furthermore had some good stories regarding noxious substances/occupational health and eerie tunnels filled with ghosts!

Apart from the lectures, we had a variety of other activities such as student ‘Pecha Kucha‘ presentations on a wide variety of topics. It was very interesting to see how all the very distinct lectures (by economists, biologists, geographers, computer scientists, mathematicians amongst others) linked up together, many for instance highlighting the effects of environmental degradation not only to physical, but also to mental health, how poor people are most affected and how social responsibility has only just begun catching up with environmental responsibility. All in all organizing this module was a great learning experience, not only for the students, but also for Lora and myself.