the hunt for phages

Pawel’s research focuses on the aquatic opportunistic pathogen Aeromonas and it’s phages. He has already isolated a good number of both, but of course we always need more. To this end, we visited our colleagues Mike Allen and Paul Rooks at Plymouth Marine Laboratory a week-and-a-half ago with a couple of water samples. (I erroneously named Paul ‘John’ in a previous post, so the two of us were David and Steve now). Paul and Mike are experts in aquatic virus biology and, in exchange for scones, clotted cream and Pawel’s home-made jam, were kind enough to teach us some tricks.

Phages are very abundant in water (or in any environment where bacteria are also abundant), but we were specifically looking for phages capable of infecting Aeromonas, so only a small subset of the total phage community. Pawel had already isolated hundreds of bacterial clones from various water samples on agar that is selective for Aeromonas (although some related bacteria such as Pseudomonas also grow on this medium). The number of these particular bacteria are around 500 per milliliter in this time of year in the lakes and ponds he sampled. Phages can be detected by sequencing or electron microscopy, but we actually want to do experiments with them and need them alive, infecting our bacteria.

The way to isolate live phage is by using a so-called plaque assay. In short, what you do is take a petri dish and fill it with high concentration nutrient agar. You grow a bacterial clone of interest in nutrient broth and mix a small quantity of this suspension with nutrient agar and pour this on top of the agar that has solidified in the petridish. The agar used in this second step is of lower concentration (‘soft agar’), so that bacteria can more easily grow inside of it. The bottom agar layer (‘hard agar’) merely serves to keep this top agar from sticking to the petri dish. Next, you take a water sample, mix it with chloroform to kill the bacteria in it, and spot a small volume on top of the soft agar containing bacteria. Overnight, the bacteria in the soft agar will multiply, turning it opaque. When a dried spot of water contains any infective phage however, the bacteria underneath are killed and a clear spot of agar remains. Such clear plaques can be picked, mixed with the bacteria in nutrient broth in order to amplify them and stored in the fridge.

A petridish containing agar full of bacterial growth. Individual phage plaques are visible for sample 3, whereas plaques are so numerous in sample 1 that they have merged into a single clearing (this picture is from an old experiment, not the current Aeromonas project).

When phage are not very numerous (i.e. on average less than one in a ten microliter spot used in a plaque assay), it is an option to concentrate them and that is what we came to Plymouth for. First, bacteria were removed from the water sample by filtering over a .45 micrometer filter using a vacuum pump:

This will remove all but the tiniest bacteria and leaves the phage fraction in. After this, the water sample was filtered using tangential flow filtration. Here, water is forced along a filter; in this case one with pores that only let through molecules smaller than 300.000 Dalton. Phages are bigger and do not pass through the filter, but instead are recirculated. Gradually, most of the water (and small molecules) leaves the system through the filter, leaving a concentrate containing phages: 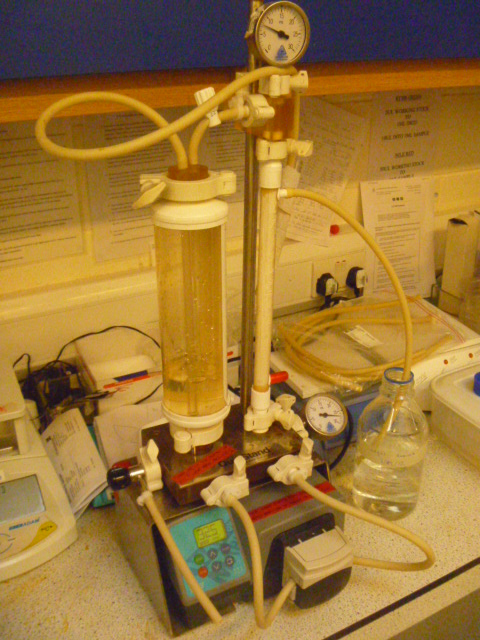 Our one liter samples thus were processed into 10 milliliter ones, expected to greatly increase phage detection in plaque assays. Upon our return to Cornwall, Pawel  enthusiastically made 340 agar overlay plates, applying concentrated phage from five locations to each (1700 spots in total). The next day, he eagerly checked the plates only to find a total of seven plaques…much less than expected from previous experiments and the literature. After the customary initial lamenting, we set out to discover whether phages were genuinely rare or whether something must have gone wrong. No evidence of contamination was found (where all plates would be harbouring a single contaminant strain happening to be resistant to phages, instead of 340 different bacterial strains of which a subset would be likely to be sensitive to phage). He next investigated whether the incubation temperature was too high, as many phages are known to be quite temperature sensitive but that wasn’t the case either. Then, he turned to the original, unfiltered water, and plated a much larger volume of it, to discover there was phage after all (infecting four out of ten bacteria tested). This indicates that something was amiss with the tangential flow filtration, probably the shear forces of it damaging the phage.

So, that was a week wasted (nothing unusual in science) but we found out that we could find phages by just using more of the unfiltrated water. (Pawel will actually mix the water with the overlay agar instead of spotting, as one milliliter on the agar surface takes too long to dry.) This Sunday we went off to collect some more water samples to start over again:

At a later stage, I will post about the actual research questions.

5 Responses to the hunt for phages